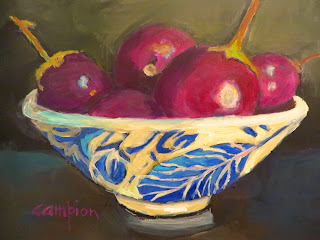 I found these small eggplants at a grocery store in Chicago and couldn't resist their beautiful color and size, conveniently fitting in a blue bowl.  I tried to research why they are called Indian eggplant, but found no good answer.  In India and some other countries, eggplant are called brinjal and is widely used in Indian cuisine.  I thought it was interesting to note that so many cultures have popular eggplant dishes--Greek and Turkish moussakka, French ratatouille,  Italian eggplant parmesan, Arabic baba ghanough.  My mother-in-law made the world's best eggplant parmesan.

I also thought this was interesting information from Wikipedia: "Botanically classified as a berry, the fruit contains numerous small, soft seeds which, though edible, taste bitter because, as a relative of tobacco, they contain nicotinoid alkaloids."  hmmm....
Posted by Diane Campion at 2:54 PM