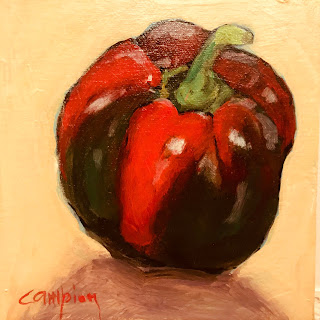 We picked a beautiful pepper from the rooftop garden and I thought it would be fun to paint.  The goofy thing changed colors right before my eyes from mostly green to mostly red.  I came back a day later to finish and had to revise the whole painting.  Ahhh, Mother Nature's trickery!

https://www.dailypaintworks.com/fineart/diane-campion/939-quick-change-artist/757978
Posted by Diane Campion at 9:42 AM No comments:

938 Love Will Keep Us Together 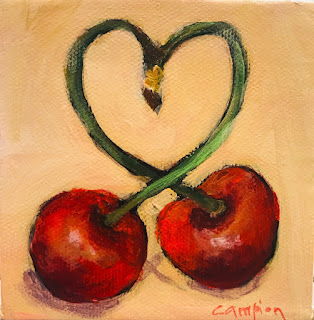 Another fun painting unfortunately with inaccurate background color in the photo.

https://www.dailypaintworks.com/fineart/diane-campion/938-love-will-keep-us-together/757352
Posted by Diane Campion at 9:11 AM No comments: 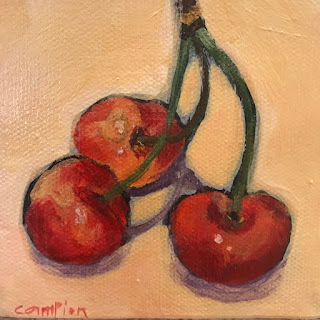 This was a fun little painting to make but I've had great difficulty getting an accurate background color in the photo.  It's really a pale yellow.

Door County, Wisconsin is ALL about cherries.  Cherries are made into and decorate just about anything you can think of , and I am quite sure greatly contribute to the economy.

https://www.dailypaintworks.com/fineart/diane-campion/937-triple-play/757022
Posted by Diane Campion at 12:51 PM No comments: 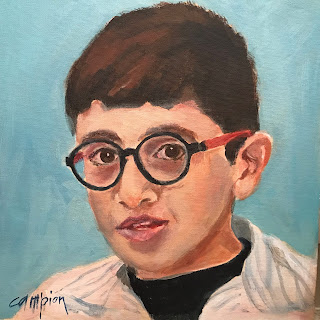 Via Anera's February 11 Facebook video, I was introduced to this 12-year old Palestinian, Hatem, who lives in Burj Shemali Refugee camp in South Lebanon.  I was taken aback by his poise and enthusiasm in explaining how Anera works to promote environmentalism and good hygiene in Lebanon.  Hatem attends one of UNRWA's schools and in addition to conducting a tour of his school, he explained that Anera helped clean the area in just 3 days, and collected 60,000 bottle caps, which were later used in an art installation.

Anera conducts a series of awareness sessions at schools "to change attitudes and behaviors around littering, pollution, recycling, sorting waste at source and composting.  Anera has designed and rolled out a year-long plan, through which these core themes are communicated to young children in an interactive and fun way.  The long term goal is to help shape the youth in Lebanon regarding the environment."

This program is funded by UNICEF and implemented by Anera.  As you may know, I am devoted to Anera and the great work they do in SO many ways to improve lives of refugees in Lebanon, Palestine, Syria and Jordan.  This is one of nearly three dozen portraits I have painted of Palestinian Refugee children in my effort to raise awareness of Anera's good work, which I firmly believe in.

Please consider making a donation to Anera, and mention The Innocents Project.  www.anera.org

Posted by Diane Campion at 11:50 AM No comments:

935 Happy Every Which Way 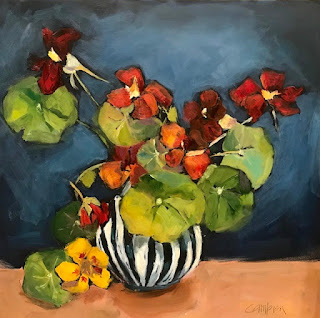 I'm getting a lot of mileage out of my rooftop garden of nasturtiums, an edible flower and leaves.  They are such a happy flower.  The vase is a favorite from Off the Wheel Pottery in Door County, and was made using the sgraffito method.

I really enjoyed setting this scene up in my studio, although the nasturtiums are a little hard to manage.

I wonder if you are tired of seeing nasturtiums.

https://www.dailypaintworks.com/fineart/diane-campion/935-happy-every-which-way/756210
Posted by Diane Campion at 10:45 AM No comments: 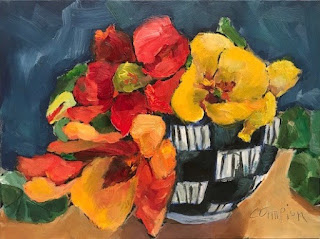 I grew the nasturtiums on my rooftop garden.  They like the full sun and are rather shy, preferring not to be fussed over.  They are such a happy flower, and edible too, with a peppery taste.

I've been working mostly with oil paints this summer, trying desperately to master them.  Not sure I'm succeeding, but I love a good challenge.

https://www.dailypaintworks.com/fineart/diane-campion/934-rooftop-garden/755909
Posted by Diane Campion at 2:15 PM No comments: 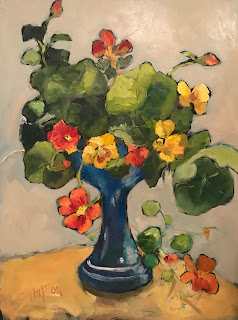 In the last couple of years, I've gone crazy for Nasturtiums, an edible flower that is fairly easy to grow.  Last year, I watered them too much and they did not do well--it seems they prefer to be ignored.  The ones in this painting are from this year's rooftop garden, and they greet me with a big splash of beautiful colors---red, orange and yellow---each time I hoof it up the stairs to the roof.  The cup was a thank you gift from a neighbor friend, and is from Door County.  What I love about Nasturtiums is their wild and crazy growth, and the sweetness of their leaves in so many sizes from large to teeny-tiny.

I always like to learn a little something about my subject, so here is what I learned about Nasturtiums.
Copied from www.exoticflowers.com:

"As for the symbolism behind nasturtiums, the blossom is known for meaning “patriotism” and “conquest”.  We’re not sure why exactly but the flower has strong ties to combat and war, perhaps because of its shocking color of orange and red or maybe because the shape of the foliage resembles the appearance of a shield.  Whatever the reason, soldiers customarily wore nasturtiums as a sign of victory, which were gifted to them by maidens.  Large blankets of flower heads were also woven to make blankets and cloaks for those who successfully won a difficult battle.  Today, the nasturtium resonates towards a “happy” theme and has also become an emblem for the warm summer months of July and August. "

https://www.dailypaintworks.com/fineart/diane-campion/933-gifted-by-maidens/753485
Posted by Diane Campion at 2:15 PM No comments: