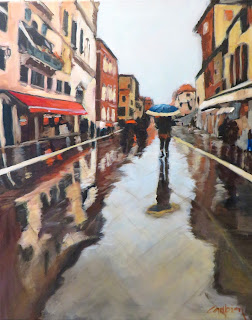 It rained miserably on one of our last days in Venice, but it didn't stop us or any of the other tourists from enjoying the day.  St. Marks Square was packed with people wearing plastic ponchos, vying for a bit of covering near the shops.  At a certain point, the crowds were too much to deal with, and so it was quite a nice reprieve to have a recommendation for dinner at a restaurant in an out of the way area, still not far from our hotel, but away from the tourists on a quiet Giuseppe Garibaldi Street.  I loved the perspective of this scene and definitely needed my ruler to sketch it on my canvas.

The evening was one of our most memorable as we went to an orchestra concert of Vivaldi's Four Seasons, Le Quattro Stagioni at "Vivaldi's Church," Chiesa Della Pieta.

https://www.dailypaintworks.com/fineart/diane-campion/875-blue-umbrella/631410
Posted by Diane Campion at 3:26 PM No comments: 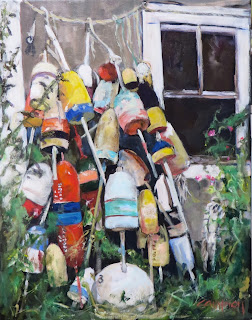 I couldn't have been any more tickled to find this little snippet of New England when we visited Brewster, Cape Cod this past summer.

This painting has sold.

Posted by Diane Campion at 3:27 PM No comments: 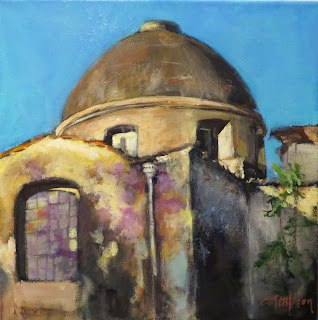 My husband and I recently traveled to Italy for a long-anticipated visit to four cities, the first being Sorrento on the Amalfi Coast.  Due to long travel delays, we arrived very late at night, and upon awakening in the morning, we were delighted to see such a breathtaking sight of the sea outside our window.  Located high up on a cliff, our hotel was a beautiful blend of old and new with the most elegant blue and white tiles of different patterns throughout, and furniture modeled after mid-century modern, also in blue.  I was in heaven.  The grounds were exquisitely designed with 70 different varieties of plantings from all over the world.

Located next to the hotel and its grounds was an old, seemingly abandoned building with all the weathered paint and texture that delivers to me that compulsive surge of desire to paint.  I photographed it from several angles during those golden moments when the light is just so perfect.  During the visit, I was unable to get information about the domed building, but finally received an email response from the hotel with explanation.

In 1597, this building was constructed by the Jesuits as a convent in what was then a rural area with orchards and citrus grove sloping toward the sea.  "According to legend, the gods had given custody of the secret garden to the nymph Colomeide that to all those who would have entered into that magical place, she would have given the gift of silence."  In 1777 the building was converted into a hotel, now called the Grand Hotel Cocumella and is the most ancient destination of recreation and rest in the Sorrento peninsula.  I wish I had known this information when we were there.  I would have looked closer to see the hotel and would have entered the grounds, which are bordered by a tall stone wall.

Throughout Italy I took well over 1,000 photos of unimportant buildings and windows with weathered paint that I find so charming.  I took a few hundred of the historical sites.  I suspect you will see more paintings of the old buildings/windows than you will of the Colosseum.

This painting has sold.

Posted by Diane Campion at 3:59 PM No comments: 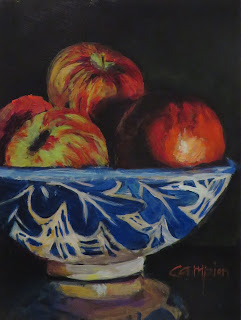 There are many indicators that Autumn is here---a nip in the air, darkness setting in too soon, falling leaves, acorns, and apples!  When our children were little, we picked apples at a local orchard every year, apples which were then made into delicious chunky apple sauce.  I love Fall, but don't like what follows.

This painting has sold.
Posted by Diane Campion at 4:24 PM No comments: 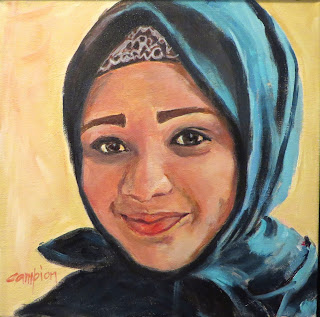 Joumana, a teenage refugee in Lebanon looks proud because she has just crafted a doll from a wooden spoon,  and a lovely bouquet of paper flowers in a skill course provided by ANERA that is designed for older teens so that they can work for a better future for themselves.  Joumana has participated in a certified early childhood education training course, but many other courses teach these young people computers, hairdressing, cooking, sports, and other life skills.

"The non-formal education and job skills courses are part of ANERA's project, "Quick Impact Skills for Development for Youth and Adolescents Affected by the Syrian Crisis," implemented in partnership with UNICEF and with funds from the governments of Germany, the Netherlands and the United Kingdom.

This is my ninteenth portrait of a refugee child served by ANERA, American Near East Refugee Aid, a non-profit, non-political organization headquartered in Washington, D.C.    The Innocents Project is my attempt to raise awareness and money for ANERA so that they can continue their good work serving these Innocents.

Look for more on this in the coming days.

Posted by Diane Campion at 5:00 AM No comments: