999 Vintage, Made in Peoria 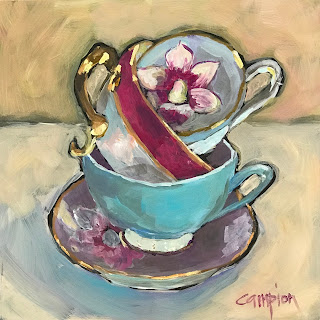 Several years ago, I painted a tall stack of nearly-tumbling teacups, and I enjoyed it so much that I wanted to revisit it.  Some of my favorite cups did not survive our move, so I will scrounge to find others.  I struggled with the title, but seeing the words "Made in Peoria" made be smile because many of my favorite relatives live in Peoria.  I think I have another larger painting of teacups in my future.
https://www.dailypaintworks.com/fineart/diane-campion/999-vintage-made-in-peoria/836999
Posted by Diane Campion at 3:13 PM No comments: 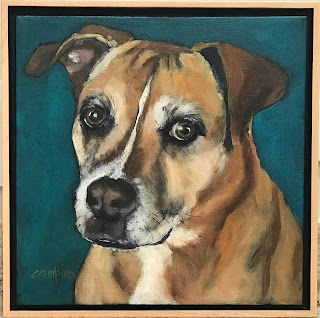 Meet Mia, one of my grand-dogs.  She is the happiest dog I know, and very disciplined.  She is so happy that she once had "happy tail syndrome," and yes there is such a thing.  She injured her tail by wagging it too much into walls and furniture.  Hard to believe that being too happy is a problem.

Posted by Diane Campion at 8:41 AM No comments: 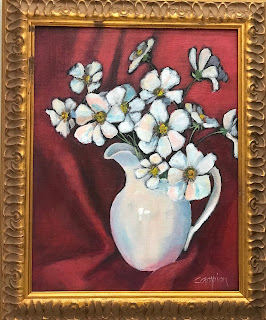 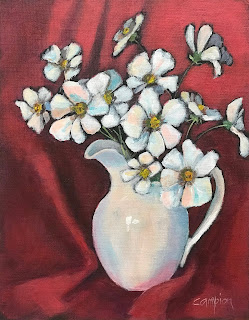 The flower season is ending here in Chicago, and each day I try to bring in a few blooms to enjoy. This summer I've come to appreciate the Cosmos  flowers as the happy, yet under appreciated flower that they are.  FYI, my husband named this painting.  I happened to have what I consider to be a perfect frame for it, too.
https://www.dailypaintworks.com/fineart/diane-campion/997-red-velvet/835608
Posted by Diane Campion at 4:09 PM No comments: 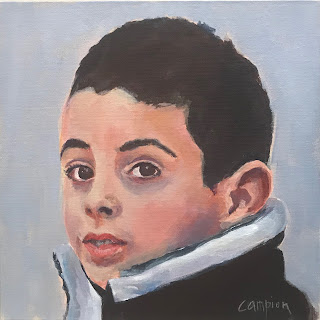 This young boy is one of many Middle East refugee children who have been served by ANERA. I have painted many of these children in the last few years for "The Innocents Project," my attempt to recognize the children  and to bring recognition to a great non-governmental organization, ANERA.

I have seen first hand that Lebanon is a beautiful country with the nicest, most giving people in the world.  Unfortunately, she has been plagued with a weak and confusing government for many years.  In addition, the influx of Syrian and Palestinian refugees have pushed Lebanon into an economic collapse.  When you add the COVID-19 pandemic and the horrific explosion at Lebanon's main port to the mix, it is a recipe for disaster.  Many NGOs and foreign governments have come to Lebanon's aid, but there is just too much work to be done.

ANERA is an 50+ year old American organization located in Washington, D.C.  ANERA stands for American Near East Refugee Aid and I am very familiar with the great work they do in the Middle East.  They have stepped up to work with other groups in the region to provide medicines, medical supplies and PPE to the families affected by the explosion.  They are rehabilitating homes, mobilizing volunteers, distributing water and food.  As an unfortunate reminder, almost 200 lives were lost in the avoidable explosion at Lebanon's main port,  6,000 people injured and hundreds of thousands of people  displaced.  Many children have been separated from their parents or are still missing.

ANERA believes that education is key.  They have built and rebuilt schools in refugee camps and have developed programs for youth, who have been the most underserved, exploited and marginalized age group.  Children are not able to get a good education in Lebanon, as public schools are overcrowded, violent and have a poor reputation.  Not everyone can afford private schools.   The official Lebanese school system is not open to Palestinians.  They attend schools run by the United Nations Relief Works Agency (UMRWA), which are overcrowded and underfunded.  39 percent of Palestinian  teenagers from Lebanon and 64 percent of Palestinian refugees from Syria do not complete their education.  There is so much more to report on the glooming situation, but next I will focus on the positive.

ANERA offers many practical vocational programs which provide cash to the youth employees who graduate.  Young people are taking the skills they have learned from ANERA's programs to help the people of Lebanon.  Their cooking and catering students help to prepare large quantities of food to feed many people.  Their carpentry students are helping to make repairs to homes damaged by the blast.  Other students are participating in nursing, solar installation, plumbing, electricity, and sewing courses---all practical skills which help both students and others.  They have improved water systems in refugee areas, improved electrical hazards, and many other improvements to refugee camps, which is their regular focus.

There is so much more to write about this great organization, but you can read about them online at ANERA.org.  They are passionate people who have devoted themselves to give dignity to those who live in the worst possible living conditions.  Please consider making a donation, no matter how small, to this fine organization.

Posted by Diane Campion at 2:48 PM No comments: 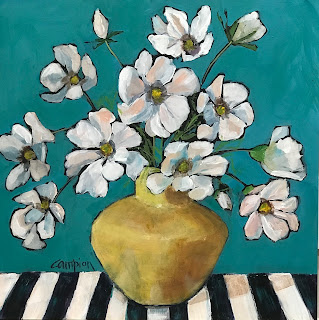 I grew these Cosmos in my rooftop garden.  I think they are a very under-appreciated flower.  Cosmos is the Greek word for harmony, and I believe that these beautiful flowers add harmony to any garden. It is thought that the word Cosmos is also the opposite of the word "chaos," which is how you might describe the beautiful explosion of color these simple flowers bring to the garden.  There are many colors of Cosmos available, but I focused on the white ones for this painting.  I love their simple beauty.

Posted by Diane Campion at 5:56 PM No comments: 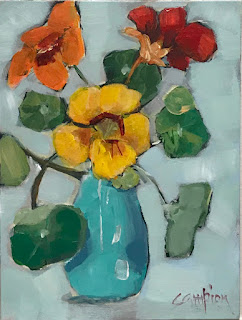 I love nasturtiums, but was very disappointed that my attempts to grow them this year on my roof did not bring better results.  I'm not sure if the reason they did poorly is because it's too sunny, too much water, or the soil wasn't bad enough.  Oddly, such a sweet little flower likes poor soil.  I'm not giving up yet, and will try again next year.  One more thing, did you know that nasturtium flowers and leaves are edible?
https://www.dailypaintworks.com/fineart/diane-campion/994--friend-of-a-friend-of-a-friend/832703
Posted by Diane Campion at 12:32 PM No comments: 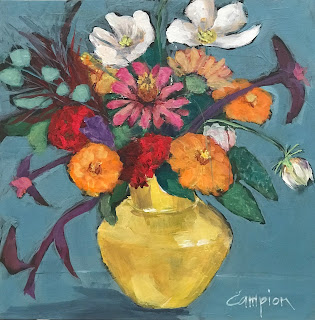 Flowers are a must-have staple in my house.  They make me happy, plain and simple.  This year, I enjoyed growing flowers on my rooftop garden.  They get regular watering and all the sun their little hearts can hold.  It's so nice to be able to pluck the blooms and plop them in a vase for a friend or family member.  We had a family dinner yesterday and this arrangement graced our dinner table.  I felt proud to create a simple arrangement and a delicious meal.  Flowers make life so much better.