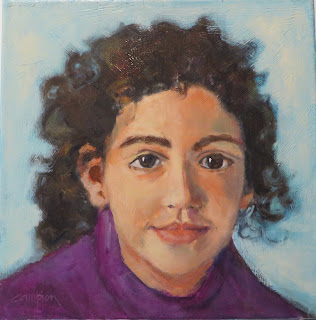 Marwa is an outgoing seven year old Syrian refugee who has lived in one of Lebanon's tent camps since she was two years old.  She and her family left their home in Homs, Syria after it was heavily shelled.  She doesn't remember much of her early life.  Marwa has become an "ambassador" or sorts to visitors, particularly to the ANERA (American Near East Refugee Aid) folks who bring supplies to her camp.  She goes to school near the camp, and readily admits she isn't fond of school, however she plans to be a teacher one day.  When asked to draw a  house, she replied, "I cannot draw a house.  I will draw a tent instead.  I don't know what a house looks like."

"Marwa" is the fifth refugee child in my "Innocents Project" series.  She is the first and only child whose name I know so far.  It is important to me to see these children as real people with names, not just falling under a heading called "refugees."  I get an idea of what this spunky little girl is like from other photos showing a gap in her big bright smile where two bottom teeth used to be.  She is seen carrying her little brother, and has boasted that she does better in school than her siblings.  How typical for a seven year old, yet her life is far from typical or normal.

ANERA works to improve the lives of all of the refugees, but particularly for the children.  Please consider a donation to anera.org in honor of a special mother, or "just because" and please mention The Innocents Project.

Happy Mother's Day to all of you!

dianecampion.blogspot.com
Posted by Diane Campion at 6:39 AM