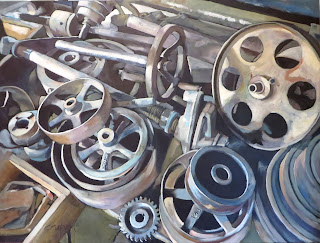 Kibbey Couse was the son of E. Irving Couse, one of the founding members of the Taos Society of Artists.  Kibbey was always interested in creating things, and eventually became an engineer and inventor.  He invented a mobile machine shop, which could be trailored from site to site to work on heavy equipment and tanks, and later for the U. S. Military.  When his mother died, he moved his family to Taos and set up shop in his parents' garage.  At this time, the E. Irving Couse House is exactly the same as it was in the 1930's.  I took the photo reference for this painting when we Art Ladies toured this historic site last year.  I knew someday it would be a painting, but never expected to be compelled to paint it so soon.