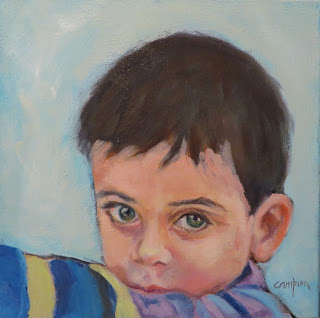 This is the fourth portrait in my series called "The Innocents Project" in which I am painting the refugee children living in camps in Lebanon and Palestine.  I am hoping to raise awareness and money for the children through ANERA (American Near East Refugee Aid) in Washington, D.C.

There is no "normal" for a kid living in a refuge camp.  Most people don't realize that it gets quite cold in the Middle East during the winter, and heat is unlikely in the camps, and often in homes.  ANERA has distributed over 100,000 pairs of shoes and boots to keep the children safe and warm in Lebanon's refugee camps and in Gaza.  Tom's has been very generous in donating the shoes and boots for the children, who otherwise might be barefoot.  According to ANERA's recent newsletter, they have also distributed millions of dollars worth of vital medicines and supplies to clinics and hospitals in Lebanon and Palestine during the past year, 20,000 relief kits (school supplies, blankets, quilts, hygiene supplies, and clothing) in Lebanon, and as mentioned previously, 12,200 parasite treatment kits to prevent lice in the overcrowded camps in Lebanon.

Please consider a donation to ANERA   www.anera.org   and please mention "The Innocents Project."