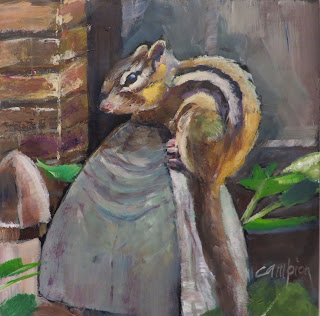 Oh, they look so cute scurrying to and fro, don't they?  HA!  Not when they are in your kitchen!  Yep, Alvin somehow made his way into our house, and scared the living daylights out of me.  Neighbor Larry came to the rescue, but admitted he was beginning to think I was imagining things, because he didn't actually see the little guy at first, who wasn't so little, by the way.  From my vantage point of standing on the kitchen chair, I saw the chubby guy squeeze his body through the pet gate grid.  It was like a cartoon.  If only I was composed enough to take a video.  Alvin enjoyed his meal of peanut butter and Italian bread stick and was let back outside later that evening.

Posted by Diane Campion at 3:05 PM